PickleBall at a glance PDF

The court is 20’ wide and 44’ long. The net is 36” high at the ends and 34” at the center. There is a 7’ Non-Volley-Zone (NVZ) on either side of the net. NVZ means you cannot hit the ball on a fly while standing in the NVZ this includes the lines. The lines surrounding the NVZ are considered part of the NZV.

The serve must be underhand and hit on a fly, striking the ball below the waist. The person on the right always serves first. The serve must be hit cross court on the diagonal. The back line and the side line are considered good serves. If the ball hits the NVZ line or lands in the NVZ box the serve is bad and the serve is lost. There are no double faults; you only get one chance to make a good serve. The serving team has both players at the base line. The receiving team has one player at the baseline (the serve receiver) and the other at the NVZ line (the kitchen line).

The receiver of the serve cannot hit the ball on a fly; the ball must bounce before returning the serve. The best position to return the serve is behind the back line (called the baseline). It is easier to move forward for a short serve than trying to move back to get a deep serve. When the ball is returned to the serving team, they also must let the ball bounce. After the 2 bounces, the ball can be hit on either the fly or the bounce.

To negate the inherent advantage that the serving team has when serving first to start the game, only one player – the player on the right side of the court – gets to serve during the first service turn of the game. After this initial service turn, each subsequent service turn is comprised of serves by both players on the serving team – beginning with the player on the right side of the court. If the serving team wins the rally (thereby, scoring a point) – the server rotates sides (from right-to-left or left-to-right) with his/her partner and serves to the receiver in the opposite court. Each time a point is scored, the partners on the serving side alternate sides 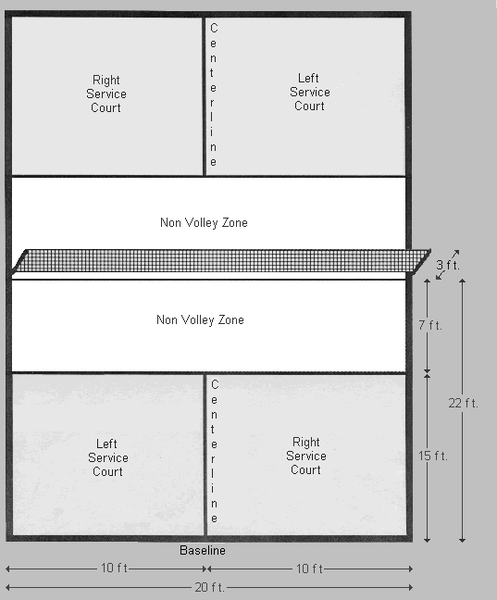